The global probiotic cosmetic products market was valued at USD 21.0 million in 2017. The gaining popularity of probiotics as a key functional ingredient which is effective against various skin concerns such as acne, wrinkle, and blemishes is expected to remain one of the favourable factors over the coming years.

Over the past few years, the penetration of probiotics in the cosmetics segment has increased as consumers are increasingly patronising cosmetics with natural ingredients as opposed to products with chemicals. Growing awareness about their clinical evidences and efficacy has also added to the growth. 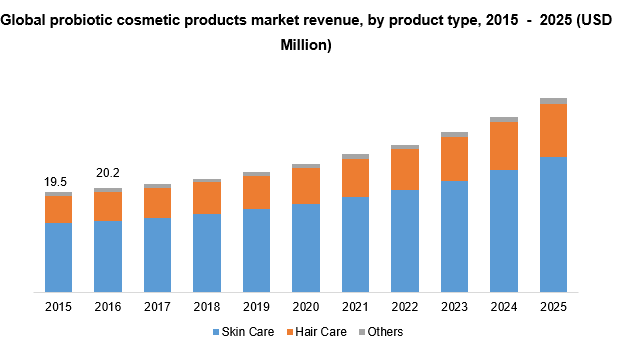 Packaging remains a key concern for companies as keeping probiotics alive through the supply chain is a challenge as these products have to be kept in aseptic conditions and have short shelf life. These cosmetics also command high price which tends to limit their mass scale adoption.

In 2017, skin care products dominated the market with more than 65.0% share. The increasing adoption of natural cosmetics as opposed to their synthetic counterparts has spurred demand growth. Among the various consumer groups, millennials are the key demand generators as they continue to incline towards organic personal care products including probiotic cosmetic.

Online retailing is expected to be the fastest growing channel in the coming years. The penetration of these stores is increasing as they provide convenience and offer a wide array of products sourced from various manufacturers. Vendors such as Amazon and Alibaba are among the key players active in the online space.

North America was the largest market accounting for more than 35.0% of the share in 2017. U.S. is a key country in the region where demand has grown considerably in the probiotic skin care and hair care categories. In the coming years, the market is expected to be more regulated as the FDA is mulling a legal definition of probiotics.

Asia Pacific is expected to be a fastest growing market at a CAGR of more than 8.0% from 2017 to 2025. Much of the growth is expected from countries such as China and India, which have a huge consumer base. Increasing awareness and adoption of organic cosmetics at large is expected to drive demand. New products are expected to make inroads to these countries in the near future.

The global probiotic cosmetic products market is highly competitive and is marked by the presence of well-established companies such as L'Oréa and Unilever. In the coming years, companies are expected to streamline their production process in the light of an expected FDA regulation around the legal definition of probiotic cosmetics.
Companies are expected to focus on product innovation and launches in the coming years. To this end, exclusive products for both men and women are expected. Manufacturers will also focus on expanding their reach to growing consumer markets such as China and India.

Focus will also be on innovating effective packaging solution as keeping probiotics alive through the distribution channel remains a challenge. For instance, ESSE, the South Africa-based company, uses airless glass packaging for its probiotic serum.